This thesis examines several known control algorithms for a platoon of ten slot car vehicles, such as a predecessor-following concept, leader-following concept, combination of these two concepts and a bidirectional algorithm. Pros and cons of these algorithms are analytically and experimentally assessed, in particular the so-called string stability, and compared with the LQR controllers. An insight into known mathematical models of the platoon is given by using three formalisms: state space, decentralized state space and 2-D polynomial approach. The experiments are carried out on a platform developed for these purposes. The platform is based on commercially available racing slot cars made by Carrera company equipped with an onboard 32-bit microcontroller-based control system. The assembled PCB board was provided by the Freescale Semiconductor, Rožnov pod Radhoštěm, Czech Republic, within their Freescale Race Challenge 2012. A few additional components such as an infrared range sensor and a wireless communication module have been added to the original system. Technical parameters of the platform and mathematical model of the slot cars are described in the thesis. 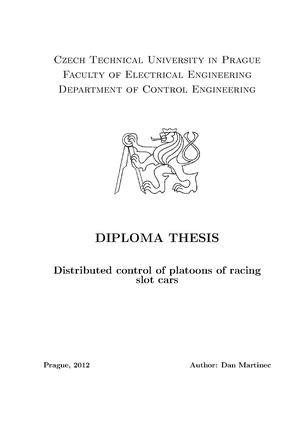