Link to the product web page on the producer's site

Student projects finished with the system:

ECP's four axis Control Moment Gyroscope consoist of revolving intertia disc mounted in three axis gimbal. Inertia disc rotation axis (#1) and the first (inner) gimbal axis (#2) are driven by servo motors (Motor #1, Motor #2), while the movement along each axis is measured by incremental sensors (Encoder #1-#4). Range of motion along the second axis is limmited by end-stop switches to about 300°. The other axis allows unlimited rotation.

Positions of Encoders and Motors are displayed on Figure 1. 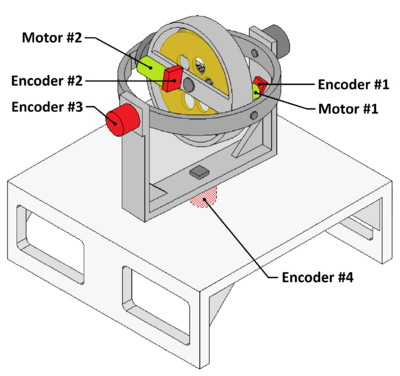 Axis #3 and #4 are equipped with electromechanical breaks that are either operated manually via switches on Ampflier box or swiched on automatically by end-stop or inetria switches.

With electromechanical breaks switched on, there is quite a lot of force required to induce movement along stalled axis. Nevertheless, with high angular velocity of inertia disc the gyroscopic effect easily creates sufficient amount of force.

Another important fact regarding breaks is the impact on system behavior. With breaks switched off, the behavior is highly nonlinear. With use of constraints available through the breaks this behavior can be simplified to almost linear.

NOTE: Running high inertia disc velocity experiments with electromechanical breaks switched off is not recommended. The forces and momentum generated by gyroscopic effect could easily damage end-stop switches as well as whole plant.

Each Encoder requires 4 wires. Two for TTL Signal data on Channel A and B, one for power supply (+5 Volts) and one for ground. Power supply and ground are common for all four encoders.

Each Motor requires 2 wires. One for input DAC Signal (input range +/-10 Volts) and one for ground.

This specification is used for setting up propper connection with Humusoft® board using two universal terminal boards (Humusoft® TB620). 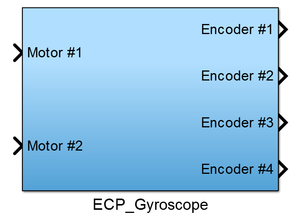 4. Range and meaning of input/otput values