Scheduling algorithm for the minimization of setup cost[edit]

This diploma thesis is dedicated to the scheduling problem that is motivated by real manufacture processes. It is a scheduling with alternative process plans subject to the total setup costs minimization, where setup times are sequent-dependent. The considered problem further covers many nowadays and practical constraints such as non-unary resources, release times and deadlines or generalized precedence relations known as time lags. This thesis also includes very detailed review of related works. An exact mathematical model is described, which can be used to solve small instances and a new heuristic algorithm is proposed to solve large instances of the considered problem. The algorithm is then implemented using programming language C# with an emphasis on efficiency and low computational demands. In the end, the proposed algorithm is tested on the wide variety of instances with regard to the time performance and the value of the objective function comparison with existing algorithms and benchmarks. 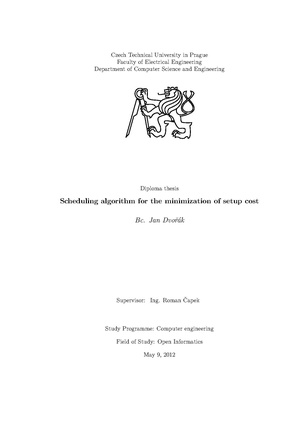