Placement and Routing for Dynamic Reconfiguration in FPGAs[edit]

The work deals with reconfigurable systems with self adaptivity based on the FPGA platform. The thesis consists of three parts.

The third part introduces a network on chip, analyzes it from the side of communication and hardware cost and data stream processing. The stress is put on restrictions due to the FPGA technology. The 2D-Mesh topology was chosen as the most suitable topology for the future simulation of the self adaptive system. Three routing algorithms and their impact to full loading network in the 2D-Mesh network are presented. The following text describes three placement algorithms and the Step-Adaptive Algorithm for improving the placement of running applications on the network and optimization criteria are defined. The simulation framework is used to test the features of the self adaptive system on test cases. The result of the simulations on the self adaptive system compares the Step-Adaptive Algorithm and the presented placement algorithms. 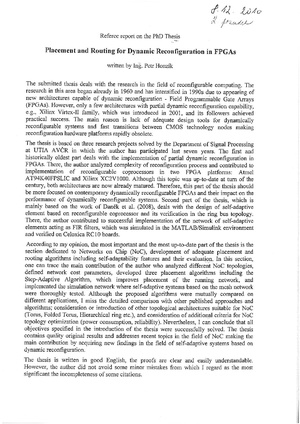 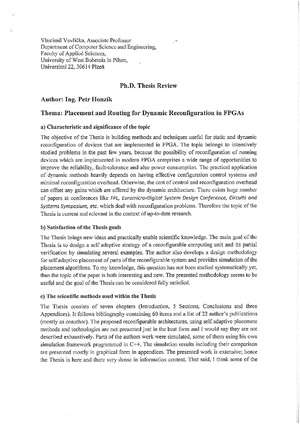