Climate changes, diminishing world supplies of the non renewable fuels as well as economic aspects are probably the most driving factors of current effort to save the energy. As buildings account for about 40% of global final energy use, an efficient building climate control can significantly contribute to the saving effort. Predictive building automation can be used to operate the buildings in energy and cost effective manner instead of conventional automation with minimum retrofitting requirements.

Dynamic models (which must be simple, yet effective) are of crucial importance in predictive control approach. As the industrial experience has shown, the modeling and identification is the most time-demanding and costly part of the overall automation process. Many papers devoted to this topic actually model only the subsystems of a building. Some of them identify a building complex in reality as simple two-zones models. Others provide extremely detailed models resulting from the use of simulation software packages. These models, however, are not suitable for control as they are not in an explicit form.

This thesis deals with the identification and modeling of the buildings resulting in a model suitable for the predictive control. A number of identification and modeling approaches is analyzed with respect to their suitability to use for predictive control of the buildings. Those that appear to be the promising candidates for the MPC are treated in detail.

A novel approach combining a detailed modeling by a building design software with a black-box subspace identification is proposed. The uniqueness of the presented approach is not only in the size of the problem, but also in the way of getting the model and interconnecting several computational and simulation tools.

As most of the industrial applications (as well as buildings) are MIMO systems that can be identified using the knowledge of the system's physics or from measured data employing statistical methods. Currently, there is the only class of statistical identification methods capable of handling the issue of the vast MIMO systems -- 4SID methods. These methods, however, as all the statistical methods, need data of a certain quality, i.e. excitation of the corresponding order, no data corruption, etc. Nevertheless, combination of the statistical methods and a physical knowledge of the system could significantly improve system identification. The thesis presents a new algorithm which provides remedy to the insufficient data quality of a certain kind through incorporation of the prior information, namely a known static gain and an input-output feed-through. The presented algorithm naturally extends classical subspace identification algorithms, that is, it adds extra equations into the computation of the system matrices.

For some kind of buildings, there is a possibility to take the advantage of using the physical structure. Hence, yet another class of modeling approaches, namely grey-box modeling techniques emerges. And as the objective is to have a good predictor on a horizon which is commensurate with the control, a natural choice is {MRI}. Some improvements to this identification methodology are suggested in this thesis as well.

Finally, a problem of the model selection is addressed. Very often, there are far too many candidate inputs/states of the analyzed system and one has to decide which of them should be included to maximize the given quality criterion. The effective methodology for the selection of the inputs and states as well as the following model validation are proposed. 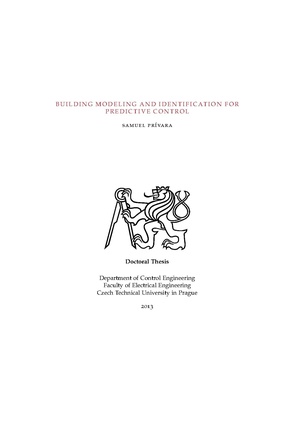 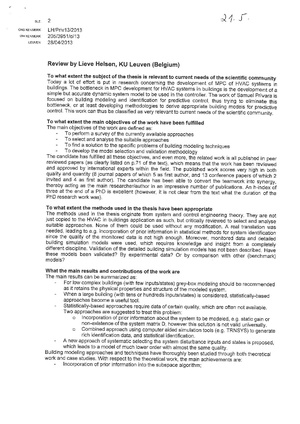 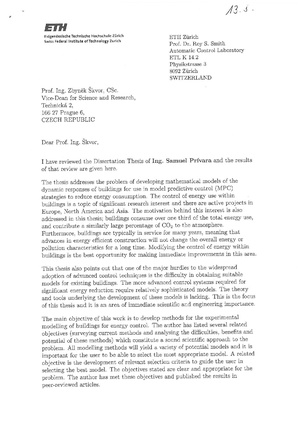 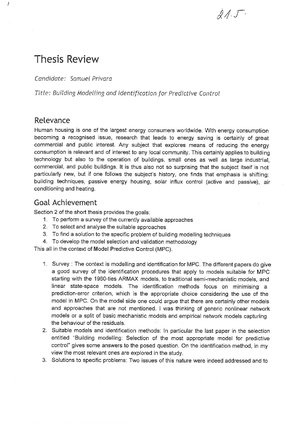