Modeling and control of piezoelectric microactuators[edit]

This project deals with modeling and control of two types of piezoelectric actuators. In particular, two lumped-parameter models were developed for a provided commercially available stack actuator. Great emphasis is given to modeling of hysteresis – a major non-linear phenomenon present in the stack actuator – by phenomenological models. Quality of the models is validated by comparison of model simulations and real actuator displacement measurements acquired by optical interferometer.Results show that all introduced models describe the behavior of the stack actuator very well. Inverses of the models are subsequently used for design of feedforward hysteresis compensators. Simulations prove that hysteresis can be compensated perfectly by model inverses; measurements show that hysteresis in real stack actuator can be compensated with very good results.The other piezoelectric actuator investigated in this project was commercially available linear plate ultrasonic actuator. Closed-loop operation of the actuator was not possible due to low interferometer real-time sampling rate, hence a few practical experiments with open-loop control were conducted. These indicated that the actuator is difficult to control in open-loop due to the highly nonlinear behavior. 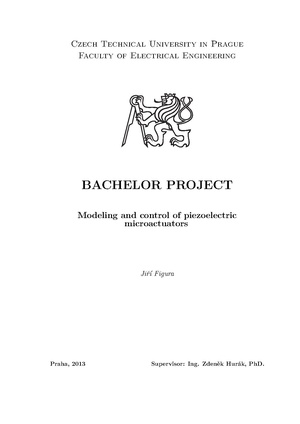