The topic of this diploma work is detection of fault states of linear dynamic system, which is described by known analytical model. In the first chapter there are described some general aspects of fault detection, e.g. general formulation of the problem, itemization of various concepts, etc. The main part of this work describes two algorithms. At first it is the computation of minimal quadratic norm of linear fault signals for deterministic systems, at second it is the computation of probabilities of different covariance matrixes (they represent different faults) of random fault signals for stochastic systems. The emphasis is given on the derivation of recurrent versions of both algorithms and also on their numerical stability and efficiency. The functionality of both algorithms is validated on one simple system. One real practical problem of fault detection of the flue gas analyzers in the process of coal combustion in the boiler plant Otrokovice is solved with a help of the algorithm for stochastic systems. The results are discussed in the final. 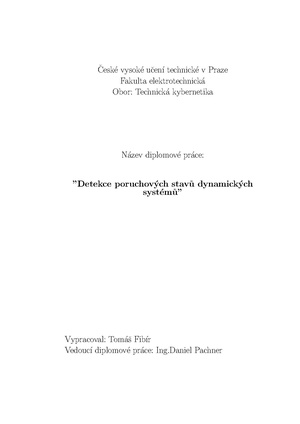