Agent technology's potentials to enhance current approaches of information access in process automation systems (PAS) such as OLE for Process Control (OPC) are the prime objectives of this thesis. In agent technology, here considered as a new programming paradigm, software systems are built from functionally independent program units called agents that are fully autonomous and active in contrast to the objects in object-oriented programming.

In the practical part of the thesis, an information access module and an agent message evaluating mechanism were implemented. Both were tested and presented in the demonstration scenario where information agents were connected to a physical laboratory system. Agents were monitoring and diagnosing the condition of the running system and they were notifying an external agent about its changes. 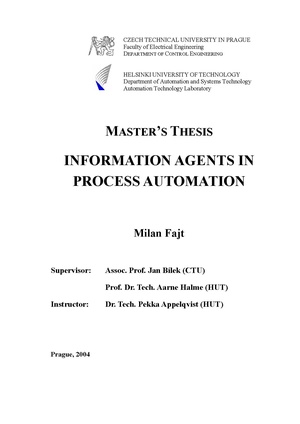