This thesis deals with design and implementation of general (vertices-edges) graph editor for use on WWW and its specialization in Stochastic timed Petri nets. The type of edited graph, the style of graphic representation and the data format for its persistent store defines user himself per XML document. The graph editor enables to define arbitrary number of vertices types, edges and to them linked informations of database character (so-called properties of object). At the same time user prescribes the shapes used for representation of vertices, the type of curves representing edges and the method of properties representation. Edited graph is saved or loaded from or to XML document and graph editor "learns" its structure from Relax NG schema. It is the base of above mentioned XML document, from which are counted the definitions of graph type. General behaviours of the editor are demonstrated on Petri nets and graph representing genealogy.The application was implemented in Java. The program can be inserted into HTML page as the Java applet and used as a desktop application. 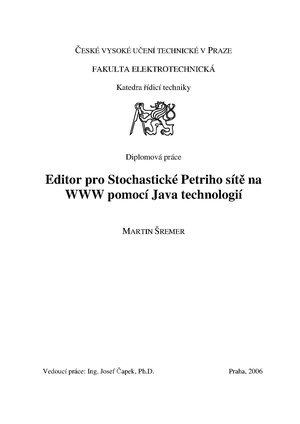