Control of hardening oven for the optical fibre connector[edit]

The goal of the submitted thesis is to summarize the study of optical connectors and to propose new version of the program using the current optical connectors hardening oven hardware. In addition the thesis is dealing with the solution of heating synchronization of particular heating chambers, interconnection oven and personal computer interface, visualization and entering the oven data.

So far the original oven control algorithms for epoxide hardening benefited from simple principle regulation, based on two - state regulator with hysteresis, which causes perceptible peaks in oven temperature. Thanks to the implementation of the PID algorithm regulator the improvement in controlling precision was reached thereby shortening necessary hardening time. Via communication among more (5–6) control units, it is possible to minimize the power requirement points, thereby limiting electrical network overload. Graphic visualization was created to make immediate industrial process monitoring and controlling possible. Setting all heating chambers control parameters and overseeing the process of connectors hardening is provided by the help of a personal computer.

After the new software implementation a possible growth in production to one oven in number of a percent is expected, owing to shortening the necessary hardening time and the possibility of using all the chambers at the same time. This theme was processed in terms of CEPOT project for RLC Praha company. The theme was being solved for three time periods, which matches to nine calendar months. 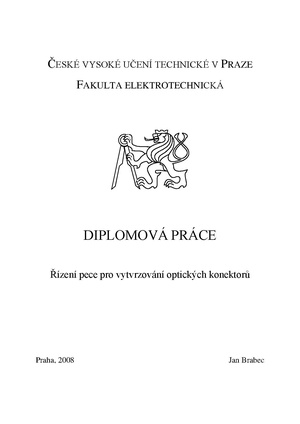