The goal of this project is to develop an inertially and optically stabilized platform for a camera system on board of the UAV aircraft Sojka and its successor MAMOK (under development). The contractor is the Military Technical Institute of Air Force and Air Defense (VT´ UL PVO). The project is a part of a program between VT´ UL PVO and the Center for Applied Cybernetics CTU FEL. Stabilized platform in its final version should be able to process requirements from a video subsystem and track still or moving objects on the ground. The control system should reduce efects of undesirable motion of aircraft, for example induced by turbulent atmosphere. Elimination of these efects will be ensured by hierarchical control structure which will control respective axes of the platform. Stabilization will be based on measurement of the aircraft position by an inertial unit. Minor aim of this project is to make research of common technology possibilities in the area of inertial measurement. Major goal of this project is to implement algorithm based on Kalman filter to estimate aircraft states.\p> 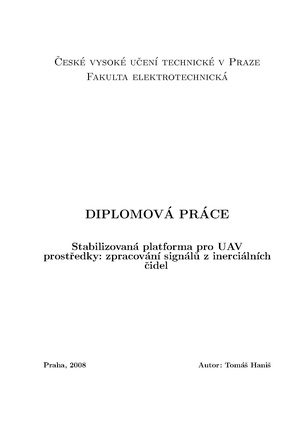