In this work the possibility of developing a contingency control strategy for certain faults in a UAV without using additional hardware is studied. First, controllers for achieving basic flying regimens are determined, that combined with a nonlinear model of the UAV establish a realistic simulation platform. Then, the problem of detection and identification of faults in the ailerons and rudder of the aircraft is tackled. The unknown input observer is used in a proposed variation of the dedicated observer. Finally a contingency system that reconfigures the controller in the case of a fault is developed. Under computer simulation, the system proved to successfully detect and identify usual faults in aircraft actuators under nominal flight conditions. Moreover, the reconfiguration of the controllers allows the UAV to perform basic maneuvers like regaining a straight level flight and perform a turn even in the presence of severe faults. 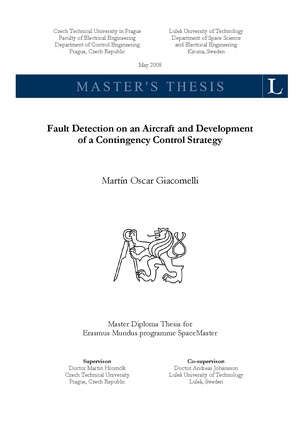