The Center for Applied Cybernetics, Faculty of Electrical Engineering, Czech Technical University in Prague, solves the project of the stabilized camera platform in contract for Czech Airforce Technological Institute as a part of the project of Czech unmanned aerial vehicle Manta. In order to solve the problem of tracking an inertially moving object, the translational velocity of the platform carrier has to be known. For this purpose, the inertial navigation unit is being developed. It contains three-axis gyroscopes, accelerometers and magnetometers as well as a GPS module. This thesis solves the problem of velocity estimation using the data of the given sensors. To do this the inertial navigation unit simulator is first developed to provide the expected output sensor data as well as the data of all known true state signals. They are used for an extended Kalman filter design that estimates the actual state of the system. The estimated translational velocity is then included in the calculated state. At the end of the paper, the C-code for the used MCU LPC2119 is made and some hardware problems are being discussed. 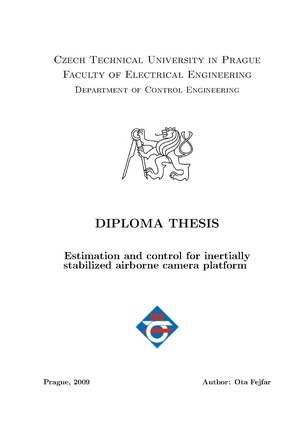