The goal of this master thesis was to create the support of CANopen communica- tion protocol in Linux target for the Real Time Workshop tool of Matlab. First of all, the toolset (target) for Real Time Workshop was prepared to enable code generation, compilation and execution at the MPC5200 based single-board computer running Linux operating system. The architecture and particular scripts of this target are described in the first part of this thesis. The main task of this work was integration of CanFestival, the open source implementation of the CANopen stack, into the code automatically ge- nerated from the Simulink model. The CANopen blockset, providing protocol API in the Simulink model, has been developed for this reason. The CANopen blockset is described in the second part of this thesis. Moreover, examples of using the target and the blockset are attached to simplify the quick start of using these tools. 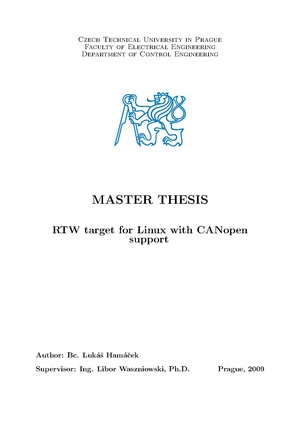