Wireless Sensor Network for Monitoring of a Patients with Parkinson's Disease II.[edit]

Wireless sensory network is designed as a star topology using Master-Slave communication protocol. The network consists of five TelosB platform devices. One of the devices acts as the master and collects data from the slave devices (units). The remaining four slave devices collect data from the auxiliary accelerometer module.

After a study of the TinyOS-2.x environment, TelosB platform and auxiliary accelerometer modules, the module's drivers were created. In addition, a communication protocol was designed along with its implementation and visualization. The Linux branch Xubuntu 2.0 with TinyOS was chosen as the operating system (OS). This OS supports TinyOS environment that uses NesC as the programming language. The visualization and PC-based data collecting was developed in Java programming language. 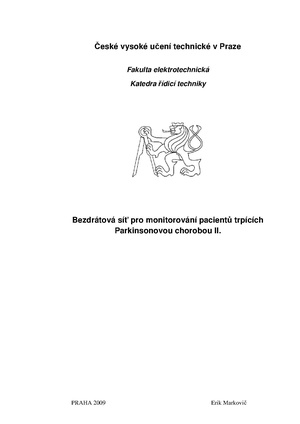