Content of the project is a transport system modelling using Petri nets of various kinds. For the purpose a hybrid Petri nets simulator was implemented in a form of easily extensible software package for the MATLAB® environment. Its components allow transforming PNML definitions of a Petri net into the mathematical form, generating evolution of the net and displaying the results in an attractive and transparent form.

Further, using the Petri nets formalism of discrete, continuous and also hybrid approach, parts of a traffic system were modelled. The three types of models have been compared from several points of view using simulations of an intersection and a road. The final part of the work is a case study of a traffic area containing several intersections connected each to another. For this, the continuous and hybrid type of Petri net is used. The model also includes a transport delay caused by distance from each intersection to another. 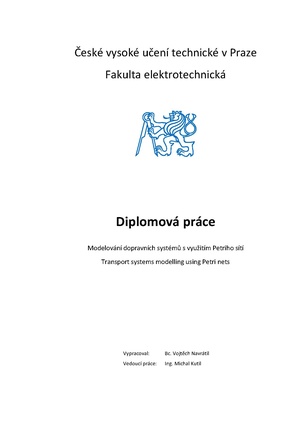