In this diploma thesis I would like to present a new approach to develop the digital class-D audio amplifier. Then I will describe one of the alternate implemetations for generating the optimal pulse width modulation (PWM) of odd bi-level waveform. The optimal PWM algorithm is used to solve problem of generating the PWM output switching waveform when the input are well-known frequency spectrums. The main task of this problem is to determine switching times, where the PWM signal changes its state. We have also discovered that with using this algorithm we can determine all n numbers of switching times in times. Further, the algorithm has been implemented off-line in programming language C with using ARM GNU software/tools, where the coding algorithm is performed by software routines that wrote to a file switching times instants. Input data are then fed to a very simple hardware - a microcontroller that generates a PWM-like output signal to directly drive a high-efficiency switching audio amplifier. The final result of the implementation shows the hardware architecture is used to implement the algorithm, it requires a hight frequency speed to generate precisely PWM output conresponding to switching times. 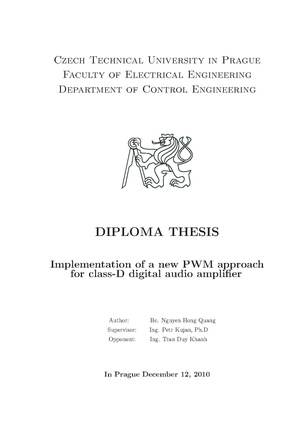