Stabilization and control of unmanned quadcopter[edit]

Recent development in the fields of MEMS sensors, miniature, energy efficient and very powerful microcontrollers and microprocessors has given the opportunity to build small autonomous flying vehicles. This thesis is studying one type of these vehicles, so called quadrotor. The quadrotor is flying vehicle similar to helicopter but having four rotors which are situated in one plane. Each propeller is actuated by an independently controlled motor. This feature allows to control Euler angles of the quadrotor such as yaw, pitch and roll thus giving the possibility to control quadrotor's position and velocity. The CTU Department of Cybernetics bought such a quadrotor prototype called Linkquad. The goal is to use this prototype for indoor flights using camera vision as a navigation reference. Unfortunately the prototype has no autonomous control loops implemented. The focal point of this thesis is design of a control law for the already mentioned prototype. This leads to other tasks such as an identification of the models 's parameters, creating mathematical nonlinear model, linearization of this model in certain trim points, design and testing of the linear controller and finally implementation and testing using the real system. 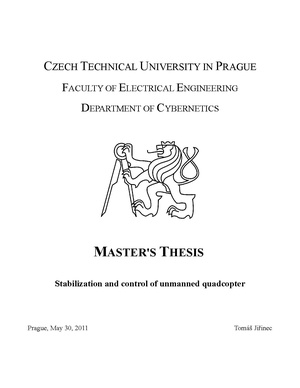