Tools for CANopen dictionaries and their integration into embedded systems[edit]

Implementation of a tools for testing, configuration and development of devices that are connected to the CAN bus and use CANopen higher layer protocol is a main goal of the presented work. The first chapter focuses to an introduction to the CAN bus communication and CANopen protocol. It is followed by an analysis of existing open-source solutions providing CAN/CANopen support which could be integrated and used to achieve thesis goals. More detailed description of QCANanalyzer program follows because that project has served as a base for work described in next chapters. The program is based on Qt GUI libraries. A basic concepts used in Qt libraries and Qt based application is described later. This is followed by an analysis of functionality already provided by QCAnanalyzer. Then the program changes and implementation of the subsystem for a comfortable access to dictionaries, using the CANopen device described in the EDS file, is documented. Functionality of the implemented CANopen dictionary tool are demonstrated on a preparation of CANopen device with help of CANfestival library. Described are even some other programs and tools used for developing and testing. 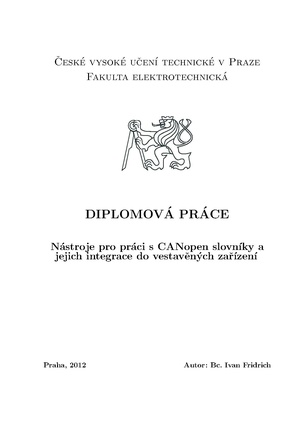