Diagnostic Tool for Industrial Networks Based on PROFINET[edit]

This thesis is concerned about the implementation of a new component for the drawing of industrial network topology. The drawing of topology consists of two parts. The first part is the calculation of the positions of vertices and the second part determines the edge routes between these vertices. The component was supplemented with functionality for the topology comparison. Two algorithms were implemented for this purpose. The output of the first algorithm is a merged topology which consists of the vertices and the edges from two compared topologies. Possible differences are marked in the visualization. The second algorithm compares the topology of industrial network and the topology which were configured in SIMATIC STEP 7. The purpose of this algorithm is to find a device in the network corresponding to the configured device. The~component has been implemented in C$\sharp$ in Visual Studio 2010 and integrated to the PRONETA diagnostic tool. 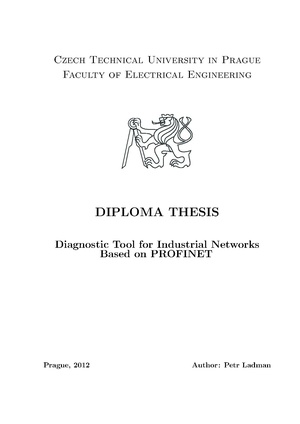