Aircraft design consists of many steps such as aerodynamic design, structural analysis and flight control design etc. and flight control is one of the crucial design aspects in modern aircrafts. Modern day aircrafts heavily rely on automatic control systems for most of the functions and there is always a persistent demand for efficient controllers. There are already many control techniques and methods developed in the field of control engineering, but only the conventional control techniques which are more intuitive, are trusted enough in the aviation industry. However, the conventional techniques only work efficiently for linear systems but in real world, the aircraft dynamics are highly nonlinear and thus there is need for a controller which works perfectly for non-linear trajectories. Fuzzy logic control is a nonlinear control technique which uses a linguistic approach for controlling, based on some sets of membership functions and rules. This project attempts to design a Fuzzy Logic controller for the autopilot functions of longitudinal motion of L410 aircraft. 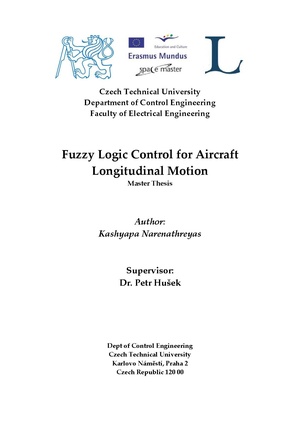