The goal of this work is a proposition of wireless sensor network for monitoring of a patients with Parkinson's disease.

The network is created from five devices in star topology by using ZigBee wireless technology. As devices are used the sensor modules MoteIV Tmote Sky (TelosB). The communication paradigm in the star topology is centralized, each from four nodes sends its data to the principal node, which operates as a coordinator. Data are acquired from the patient body by designed expansion module with analog or digital accelerometer. A Tmote programs for data acquisition, data sending, receiving, processing and data transmission to the personal computer are built by using the TinyOS operating environment, nesC language and Open-ZB stack, which is developed in Polytechnic Institute of Porto, Portugal. Open-ZB stack is the open source implementation (provided as a tool) of the IEEE 802.15.4 and ZigBee protocol in TinyOS/nesC. A PC programs for data processing and displaying are created by MS Visual Studio 2005 in C# language and in C language for UNIX OS. 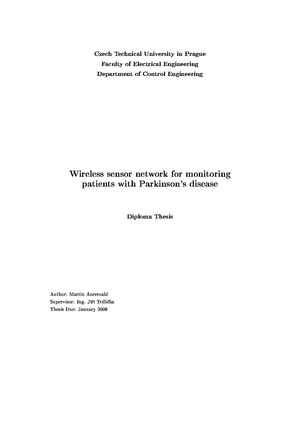