For a governmental contractor – Czech Air Force RD Institute (VT´UL) – the inertially stabilized platform for a tracking camera system is being developed. The system consists of two cameras and a laser range finder. This sphere-shaped platform will be carried by a new Czech unmanned aircraft MANTA, a successor of the successful SOJKA UAV. The purpose of the complete system is to track standing or moving targets while attenuating the influence of motion of an aircraft and other disturbances like wind bufetting. The system is comprised of two relatively independent subsystems – inner fast inertial feedback control loop and outer slow visual feedback control loop (based on image recognition, locking and tracking). This diploma paper describes a design and also an implementation of the Line-of-sight stabilization of an airborne camera system using inertial measurements. For the designed method of stabilization the simulation model has been created. Consequently, this work introduces realized hardware and software necessary to implement and test all designed algorithms in real developed inertially stabilized platform. 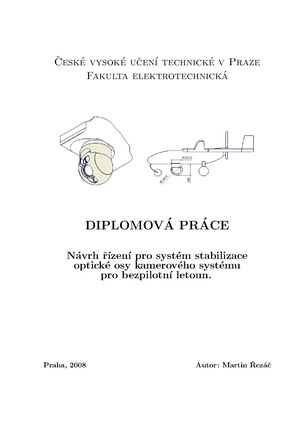