The graduation thesis 'Adaptive Observer Based Controller' is concerned with the use of linear extended state observer for control design of systems with internal state variables unavailable for measurement. The inaccessibility of internal states of a physical plant corresponds to a widely spread problem in all fields of engineering.

The state variables include useful information that is required for control system de- sign. However, it may be either impossible or impractical to obtain measurements for all state variables. In that case, the state variables must be estimated. The inaccessible in- ternal state variables are made available through state observers using input-output data of the physical plant. In addition the traditional state observers require a good mathe- matical model of the plant as well. Providing extracted internal variables is the invaluable function of state observers, which became indispensable tools in control engineering. The main idea of the alternative design framework of extended state observer is the ability to estimate the part of the plant that is not described by the mathematical model. It means to estimate both unknown plant dynamics and disturbances in real time. Control performance of this control design framework including an observer may be enhanced, if the observer is able to adapt its bandwidth according to the controlled system dynamics. An observer re°ecting this dynamics is called adaptive observer. 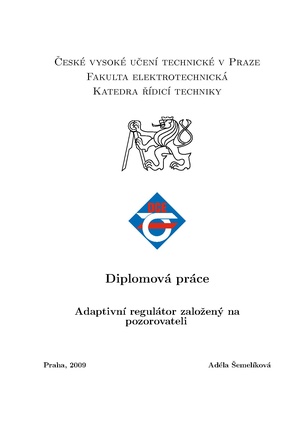